The Bill proposes a series of immediate steps to combat human trafficking in Ontario: Ontario Court of Appeal Decision
A recent decision from the Ontario Court of Appeal (R. v. A.A., 2015 ONCA 558) is helpful in understanding how to apply and interpret human trafficking offences in Canada’s Criminal Code. For example, the court ruled that the benchmark for determining exploitation should include the consideration of psychological harm, not just physical harm.

Questions about temporary resident permits raised in House of Commons
On June 10, 2016, Martin Shields, Conservative MP for Bow River, Alberta raised questions about temporary resident permits (TRPs) for trafficked persons in the Canadian House of Commons. Hon. John McCallum, Minister of Immigration, Refugees and Citizenship Canada (IRCC) responded that for the period from November 3, 2015, to April 22, 2016, IRCC issued 12 TRPs to individuals "suspected to be victims of human trafficking". In that same period, no TRPs were renewed for potentially trafficked individuals.

MCIS online training initiative on human trafficking
MCIS Language Services has added new modules to the free online training program it developed for service providers working with survivors of human trafficking. The program is geared to healthcare professionals, law enforcement officers, lawyers and paralegals, and professionals who work with children. The resource is available in French and English.

Recorded on May 30, 2016, this webinar looks at how to support victims and survivors of human trafficking in Canada. Presenters include Rosalind Currie from the BC Office to Combat Trafficking in Persons, and Michèle Anderson, an Anti- Human Trafficking Advocate from Covenant House in Toronto.

The CCR successfully held its Spring 2016 Consultation in Saskatoon 2 - 4 June.

A workshop on trafficking discussed access to protection for trafficked persons focusing on issues affecting non-citizens, Aboriginal communities, and other individuals trafficked in Canada.

A national meeting on migrant worker issues was also held in Saskatoon bringing together migrant workers, advocates for migrant justice and labour activists.

Two resolutions were adopted by members at the Consultation’s General Meeting.

What's So Special About Canada? Understanding the Resilience of Immigration and Multiculturalism 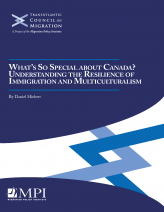 By Daniel Hiebert for the Migration Policy Institute; this new report provides a comprehensive review of Canada’s immigration policies past and present. It is useful in understanding why economic migration trumps humanitarian concerns when it comes to immigration policy and narratives, and how this can be a challenge for seeking policies to prevent trafficking and protect trafficked persons in Canada.

US House of Representatives Introduces New Legislation on Health Care and Human Trafficking
In June 2016, the U.S. House of Representatives introduced a bill ensuring that healthcare professionals get comprehensive training to help trafficked persons. The same bill was introduced in the Senate last year. The Polaris Institute is calling on the public to urge Congress to pass this legislation.

In the news across Canada