Mennonnite Central Committee put together a resource called Indigenous Peoples of Manitoba: a guide for 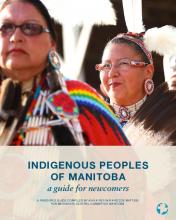 newcomers, which provides newcomers - and all Manitobans - with an introduction to the cultures and histories of the Indigenous peoples of Manitoba.

Immigrant and Refugee Community Organization of Manitoba, or IRCOM, (Winnipeg) has produced a manual based on its ‘Youth Peace Camp’ for youth from Indigenous, newcomer and other settler backgrounds. Drawing from peace-building efforts in various parts of the world, IRCOM and partner organizations have designed the Peace Camp and the resulting manual to facilitate peace-building, inter-cultural dialogue techniques to build lasting connections, empathy and awareness.

IRCOM has also created a manual for an interactive workshop entitled “Indigenous History Simulation for Newcomers.” An educational simulation similar to the Forced Migration Simulation, which was also adapted for lower CLB level learners. IRCOM also presented this at the IRCC Language Training and Assessment Conference held in early 2018.

The materials associated with these activities are attached.